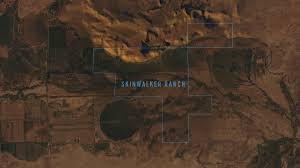 This ranch may look ordinary, but this 500 acre ranch is home to mysterious creatures, high radiation, and many unexplained anomalies.

But what exactly is Skinwalker Ranch? Skinwalker Ranch is a large plot of land located in Fort Duchesne, Utah that has seen strange accounts of cattle mutilations, high radiation levels, and sightings of UFOs. Skinwalker Ranch is said to look like a fairly normal farm when observed from a distance, but when close proximity is reached, these abnormal sights emerge. But how did this seemingly ordinary plot of land become an epicenter of these weird occurrences?

To understand the reasons behind these strange sights, we must first understand the history that surrounds the ranch. The history of this ranch dates back to the times when the Navajo and the Ute Native American tribes occupied the area around present day Skinwalker Ranch.

The Navajo and the Ute tribes met near the area of Skinwalker Ranch and their relationship was instantly full of conflict and hate. The Navajo, being a very violent and aggressive tribe at the time of this instance, enslaved many members of the Ute tribe.

The Utes, having hated the Navajo tribe for enslaving their people for so long, eventually placed a curse over the land which is now Skinwalker Ranch. In fact, the Utes put a curse on the land that supposedly caused skinwalkers to begin to inhabit the area.

But what is a skinwalker? A skinwalker is a type of evil witch that is part of Navajo culture. The skinwalker is a mythical beast used in many Navajo folklore that is known for its ability to take the form of any animal. This creature is best described as a shapeshifter.

Since the Navajo tribe had long feared these creatures, the Utes used this curse as a means of retaliation for the many years the Navajos kept the native Ute people as slaves.

The Utes also cursed the water. According to Ute beliefs, water was full of evil spirits and was a negative mass on earth. We can find more credibility of this curse on the waterways when we look at the multiple records of mysterious lights and ball-shaped objects (unidentified and seemingly appearing out of nowhere) that are said to have crashed into the bodies of water found near Skinwalker Ranch.

Other strange things have supposedly been seen at skinwalker ranch as well. Multiple UFO sightings have been reported. In some of these cases the UFOs have been reported to only be visible for a few seconds and travelling at speeds that would potentially be deadly to humans.

Some reports show signs of severe cattle mutilations. Cows on the land will fall dead to an unknown cause and may sometimes have some sort of facial deformity.

High levels of radiation have also been proven to exist in Skinwalker Ranch. Some areas are known to have sudden waves of radiation that can leave burns on human skin. Some suspect this high radiation could be the cause of mutated animals. The Shermans, the previous owners who purchased Skinwalker Ranch in 1994, encountered a wolf-like creature that grabbed onto one of the cattle. The owners shot the wolf with a .357 magnum at very close range. After two shots, the wolf let go of the cattle and stared at the people. A few more shots were fired, which caused the wolf to walk away, seemingly unharmed and unwounded.

There have also been many sightings of mysterious lights, which seem to have no source. The Shermans also claimed that they saw apparent fireballs and mysterious balls of light shooting across the sky.

Are these anomalies caused by the curse of the Ute tribe many years before? It would sure explain why the area is a hotspot for these extraordinary sights. Ideas and theories still circulate, but the hidden secrets of Skinwalker Ranch still remain a mystery.

If you want to find out more, the History Channel has a TV series called “The Secret of Skinwalker Ranch” where a group of experts investigate the unknown and the strange anomalies on this mysterious ranch.