Reasons Why the Wentzville School District Should Go Back to Online 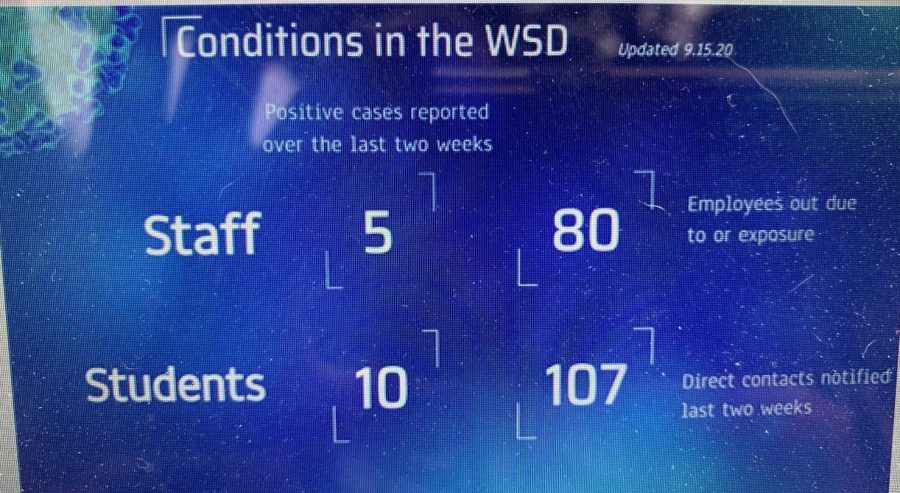 As cases rise in the Wentzville School District, concerns do as well.

The purpose of this article is to argue the point on why our school should go back online fully for all students. This article will have some of my opinions.

The school year has already taken off and we are a few weeks into it, but of course, there have been a couple of changes this year due to COVID-19. As of now, we are in a level two, which means we are alternating students every two days and on top of that requiring masks when students are in the building and including more things to keep the student and teachers safe, like cleaning the desks and computers between every class period.

But being under level two does not cover all the bases of being safe. Things like lunch, sports, and activities related to the school have ample opportunities for the virus to spread. Before school even started, we did already have at least two confirmed cases, with one being in the band and another on the football team so it already shows that we are not safe from the virus. Even though these two cases seem small they could have had a rippling effect.

Before we start on why I think the school should go back online, we need to understand COVID-19 in relation to our school. Now it may seem that since younger people are not affected as much by the virus as older people, so that it wouldn’t matter if students go to school, but actually the opposite is true. If a student were to get the virus from the school, it may not spread to others in the school, but more likely spread to their family. In a sense, when younger people get the virus, we may not be in danger, but we are putting the people around us in danger. It’s like being a deadly smoke bomb. Sure you’ll be a little sick, but it will be a lot worse for the people around you.

Now that we understand that COVID-19 is a threat against the general population, we need to see how it can be a threat here. Now, it is required to wear a mask, which is great because wearing a mask reduces spread through coughing to about 1.5%, but the school is not requiring these masks to be worn during sports, lunch or band because of multiple logical reasons.

Now, even though these points when masks are off we are socially distanced and trying to be safe, it can’t always be enough. Even though there are small groups of people and they wear masks all day at school, there’s no control over what people do outside of school. Say someone goes to a large gathering and happens to get it when they’re at lunch or practice with no mask and around people. For a long time, there is bound to be some spreading.

Now of course I can’t just say that it is bound to spread without some facts of course. First off, you can’t just instantly get COVID-19 in a snap by being with a carrier, but some experts do say that it could only take around 10 minutes for it to be transmitted. So if someone were to spread it to you you would be spreading it yourself for up to 72 hours. So you know just how fast it could spread, but why would it matter if Wentzville doesn’t seem to have a lot of cases.

Well, let’s look at the numbers. So let’s start big with the number of cases in Missouri. As of now, Missouri has 103,000 total cases, which peaked around August with it’s highest news cases a day. Then, it seemed to have been going down, but again it was just reported that it  is on a rise again.

Now, you may look at these numbers and facts thinking it not that bad, but with all these facts that are adding up on each other, it shows how much Wentzville can be in danger. That is why if we had schools online, we could at least control one place where it could spread.

Now, I could go on and on about many more facts and numbers of COVID-19 but I won’t. I could rebuttal other people’s opinions on how we need school open so we can get “real” education, or how smaller children are still going to daycares. I could bore you more and more, but I would like to be blunt and just say that if we want this to end sooner we need to make sacrifices. Everyone wants this to end. No matter who you are you probably want things to turn back to normal.

Wanting things to be back to normal is the thing that we all share right now and if we want to get there faster I believe that we should go fully online. We can’t be sure that school shutting down is going to stop COVID-19 in its tracks, but it will help stop the spread. So make your voice be heard in any way you can because who knows maybe you’ll help convince a school to fully go online. Well, I highly doubt that, but maybe you can help people understand more about COVID-19 and just how much we should care about it. We may not all be in the same boat, but we all are in the same mindset of wanting normality back.