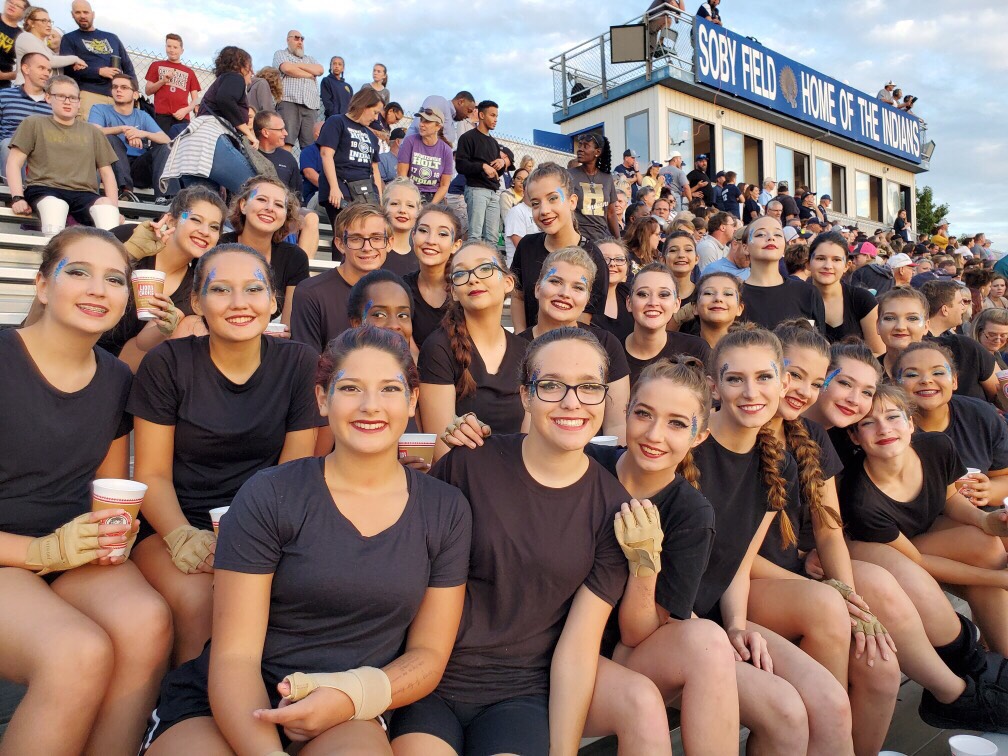 Is Color Guard a Sport?

What is classified as a sport? As Dictionary.com defines it, a sport is, “an athletic activity requiring skill or physical prowess and often of a competitive nature.” Cheer, dance, and gymnastics are all things that fall under this definition and are accepted as a sport by a minority of sports enthusiasts.

But the question we need to ask is: What is color guard considered? Color guard is the visual and artistic interpretation of the music the band plays by dancing and tossing flags, rifles and, sometimes, sabers.

Throwing a 45 toss is just as hard as throwing a softball. Catching a flag wrong could break a bone or tear a muscle. Some of the hard-working vets, who are guard members and have survived freshman year on the team, have been chosen to try out for advanced flag line and the toss combinations in their work is causing discomfort in the rotator cuff to the point where Megan Smith (’22) went to see her doctor from the pain. Smith found out that she had torn her rotator cuff and cannot do guard for the first home game.

“It makes me feel extremely upset and defeated. I find happiness in performing and I’ve lost that for a bit,” Smith said.

Guard requires time, skill and even pain tolerance. For this exact reason, color guard is a sport!

Tossing a flag is terrifying. If you run, you will have a less likely chance of getting hit, unless it is a 45. Sometimes, ducking and taking cover will spare more pain than running from tosses like a single-and-a-half, double, parallel, 45, and so on.

Every day is a new injury in color guard, whether it is a bruise or a foot being fractured.

Color guard is a sport because we work just as hard or harder than any other sport.”

On Sept. 3, 2019, Lily Nemec (’22) was hit in the face by the crutch tip of her flag and the tape on the flag cut her cheek open. During band camp, Lilly Bookout (’22) was practicing her 45 toss when it came back and busted her lip open. While tossing rifle, one of the color guard captains, Ashley Shannon (’22) , was hit in the face with the rifle and also busted her lip.

When a color guard member gets hurt, no one cares. But as soon as the quarterback on the football team gets hurt, the school is devastated. Why?

The reason is that football falls under the common idea of a sport when color guard is barely known. I think that the guard has stricter rules than the football team does.

One example is: we are not allowed to do the wave with the crowd at the games because it is unprofessional. I am not complaining. I like being professional but I feel like we have more rules being enforced than the football team.

The color guard captains and the director have the guard do cardio exercises every rehearsal to develop endurance which will increase the amount of running done without panting or blacking out during shows.

The increased amount of running makes muscles sore and develops muscles for the people who run the whole time. We exercise and develop muscles just like a tennis player does.

Physical exhaustion can cause people to pass out. Two color guard members, Rachel Merrel (’22) and Lilly Bookout (’22), have passed out or have nearly passed out from the extensive amounts of running they do during drill.

“Color guard is a sport because you do physical activities,” Rheanna Lewis (’23) said.

Color guard is a sport, but it is not recognized as one! It falls under the definition and it is just as hard as cheer and dance.

“Color guard is a sport because we work just as hard or harder than any other sport,” Alyssa Lingle (’21) said.

Color guard and football have more in common than you think. Everyone is born with different features but fall under the same species because they share certain traits. Football and guard both practice on Soby Field. Football players and guard members both run across the field, throw objects, and put on a show.

“We practice and we compete for actual prizes. In the front trophy case, all those trophies are from color guard,” Abbey Bancroft (’22) said.

Color guard gets prizes. We try hard, we practice for them, and love it. Guard is not a thing that gets boring because we learn new tosses every now and then and there is always something to learn.

“We are dedicated and don’t need to be labeled as a sport to feel important,” Lingle (’21) said.

It is true. At the end of the day, color guard is full of strong, beautiful people. We do not need a label to have fun so call us what you want.

One Response to “Is Color Guard a Sport?”