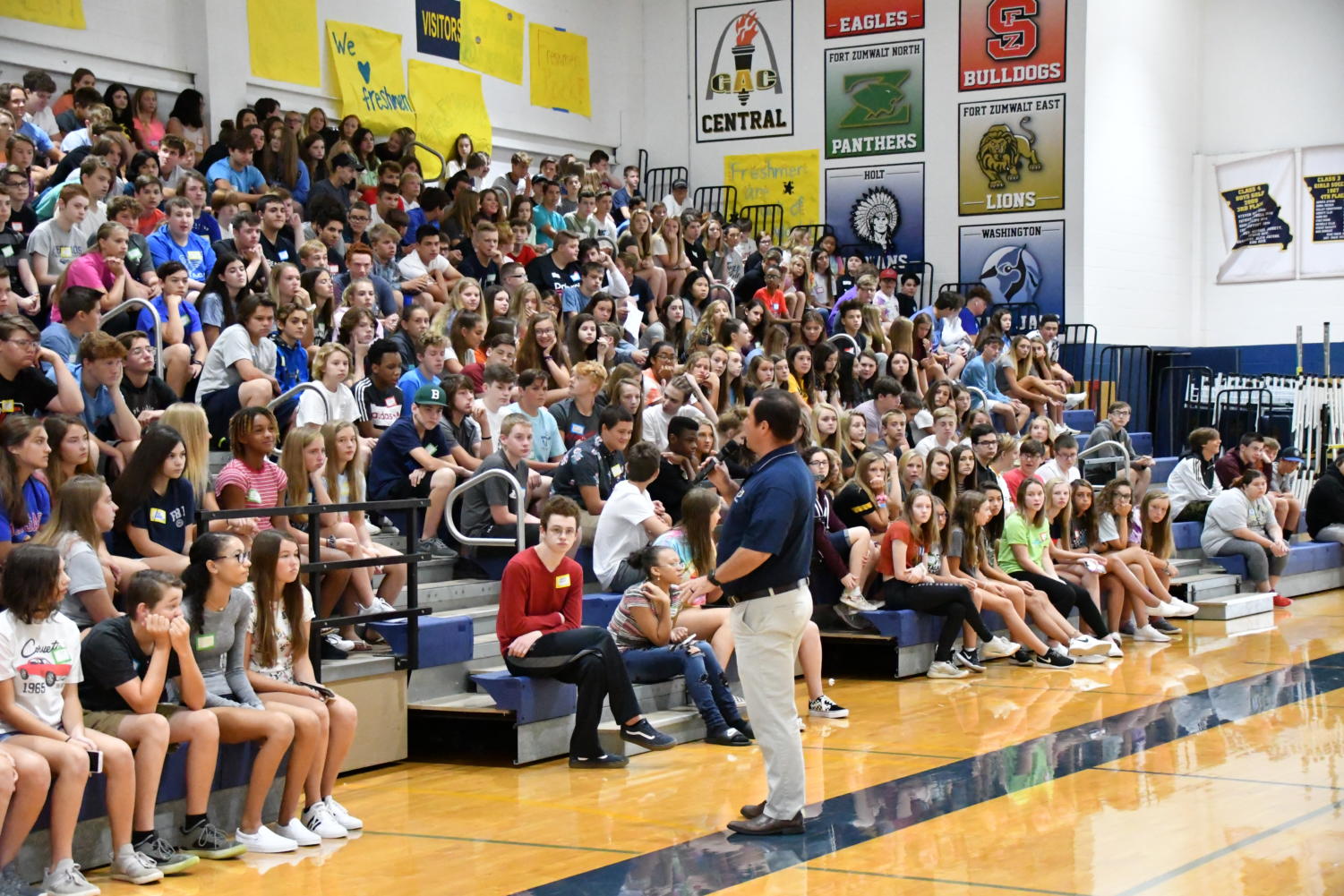 There are so many freshman here this year, they barely fit into the big gym. (Jake Adams)

There are so many freshman here this year, they barely fit into the big gym.

It is the year 2019, a fresh new year full of possibilities. With that comes new people, but this year is different. The difference is that the class of ‘23 happens to be the biggest class this school has ever had. This is significant because it shows that the community is growing and so is the school.

Counselor Dr. Litzsinger explained that the new freshman class of 2023 has not only maxed out some of the classrooms but also brought to light the fact that the school is running out of room. Dr. Litzsinger said the school has added a new Algebra 1 section because Algebra 1 was booked. The school has done this because they want the freshmen to feel welcome and not be crowded into one class because there is not enough room.

¨They don’t even know it yet, but we’re doing that to modify our schedule,”  Litzsinger said.

The seniors that graduated as the class of 2019 had 400 students, and now there are 550 freshmen. “That’s the biggest difference. So I mean, that trickles down in every aspect you can think of, freshman sports, I mean, the list could go on forever,¨ Litzsinger said.

She informed us that the administration knew this was going to happen and that they started preparing during Christmas time, but it came full force.

“There’s around 460 seniors this year. Sophomores and juniors are close to that. Then there are 550 freshmen.,” Litzsinger said.

In total, accounting for all the students, there are around 1,957. They say it is the biggest enrollment they have had in the district. We are about 150 students over Timberland and about 350 over Liberty. During the first week of school, we had 11 enrollments and continue to have 6 to 7 each day of the week.

Holt will constantly have to move students from Holt to the new school so we don’t reach full capacity at any point in time. The new high school is being built in this area because this area is the fastest growing with new families having mostly freshman kids. Some kids moved over the summer and didn’t inform the school so now they are working on fixing the student lists and records.

Moving onto what the freshmen class is like, Dr. Litzsinger has said that the freshmen need so much of what the administration has to offer as far as guidance. For curricular direction, Holt wants the freshmen to have a positive first year so the teaching staff is being as positive as possible.

Though they were preparing for the incoming freshman class, the LINK crew was panicked with the school being closed all summer, but they are doing their best to work out all the problems like not having power or the internet on the first day of school. We started off the school year not great, but Holt administration and staff are doing their best at working things out. It has affected a lot of things, from the classroom numbers to the counselors being booked all the time.

The state makes Holt determine their enrollment by around the first Thursday of September after Labor day and everything will start to smooth out. For now, the numbers are tight and will continue to be this way. So far the classes range from 30-33 or so students, thus having to open the new algebra class.

The Holt band has been affected as well. Mr. Cunningham is, in fact, happy with all the people in his band.

“This isn’t the biggest freshman class that we’ve ever had in the band. In fact, the biggest band we ever had was 208 people and in the last fifteen years, we’ve stayed around 175-208. Also, this year we have 170 people and it’s a great number to work with, both marching and playing although sometimes the band room is super crowded with all the people plus their things, so, it isn’t big enough sometimes. Next year looks even bigger. We have about 102 in the band so even if we keep sixty or sixty-five of them, we can grow by as many as twenty-five to thirty next year. So we’re going to keep growing, and we’ll be crowded, but it’s great and it really affects us positively,” Cunningham said.

Students have a lot to say about the huge influx of freshmen as well.

“The freshmen class hasn’t had an impact on me other than them standing in hallways talking, and taking up space making it more congested, and harder for me to get to class, ”Hannah Hartwell (’22) said.

The size of the freshmen class does not seem to affect the students as much as it does the administration.

“The size of the freshman class is really exciting because I have had a lot of new students in my classes. I have an entirely new theatre arts class, so I’m really excited to get more people involved in theatre,” Mr. Milhous, the Theatre teacher said.

The teachers can agree that all of the new students make the hallways more crowded, but thankfully a new school is being built.

“I’m seeing the biggest issue right now in the halls and the stairway going down to lunch. They’re already building a new high school. Next year is going to be tough. I think there will probably be about 2000 students. But then the following year, we’re going to lose a whole bunch of kids to the new high school,” Ms. Swanson said.

The school has a lot to offer and the size of the 2019 freshman class has its ups and its downs, positives, and negatives. Yet overall, the schools’ teachers, counselors, administrators, and even students are doing everything they can to make the new freshman students feel comfortable and welcome at Holt High School.

One Response to “Biggest Freshman Class”